The park is located in MetroWest, an upscale popular Orlando suburb. Publix grocery along with some great conveniences (restaurants, bike shop, beauty) within a mile. The park has some wide open spaces and there are usually events to watch on the weekends. The park is nicely landscaped, but the campground itself needs some serious attention. Campers have obviously been illegally dumping grey waste making the ground soft, wet and creating a serious mosquito breeding problem within the canopy. The pads are concrete but are mostly unlevel...one of which (#5) actually caused damage to my front leveling seals. Best spots: 9 (full), 10, 14, 15, 16, 23, 20, 25, 27*, 28*, 29*, 30*, 31*, 32*, 34, 35, & 36 (all partial). (*entry directly across from each other making turning radius difficult if one is occupied). The showers are outdated residential grade and filthy. The hot water tank is small and empties quickly. The hygiene issue is due to the unprofessional cleaning service that has the (current 2014) contract. They spend five minutes inside the bathrooms and then dump the dirty mop water outside of the entrance in the dirt each morning. They did not wipe down the washer / dryers even once during my stay (yes, they close it at 4:30). I reported their poor performance to the front office staff and they were indifferent to the complaint. I should have said something to the grounds crew, as they actually seemed to care and tried to attend to issues quickly. The office staff is the real problem with this facility. No one in the office knows anything about RV'ing or even the camps' topography itself. Although a few of them are accommodating, most act bothered by the simplest of requests and can be heard physically sighing when a camper walks in the front door ("Oh no, not YOU again!"). They will blame their own frustration on the city's software...I blame it on the lack of hospitality training and poor management. Regardless of the issues above, the camp is affordable, convenient, and relatively easy to reserve spots with except for peak season. The open space to play with my agility dog made it worth returning to.

Friendly staff, nice lots. Laundry facilities could be open longer. The WiFi is only at the main office a half mile from the RV sites. Excellent playground and if you like folf there is no better place. Also the bathrooms are clean. Lots of wildlife to enjoy.

Very nice park. Lots of trees, so Satellite is out in most spots. Less than 2 miles from Universal and 10 miles from Disney. Spots are paved but some are not quite level, so bring some jack blocks. Only 36 sites so plan ahead. I use to stay at Ft. Wilderness and Tropical Palms, but $100 and a few more bones for a week makes this the park I will always come to in Orlando. I drive a 38' Dutch Star. Any longer would be to big.

| A bit of natural paradise in the heart of Orlando!

What a pleasant surprise to find this gem of a park. Run by the City of Orlando, it is truly "In the woods" but close to attractions. Wish we would have found this place sooner. $19/night is a real steal for a piece of the forest when you want respite from the tourist whirlwind. Great deal for a great place.

| In the woods - know the opening hours!

Be aware of the opening hour - generely 8AM to 5PM. If you will be check in at a later time - do call, booking and prepay. That will give you an access code for the gates. Othervise the gates will be closed and you can't get in. We learned that the hard way 5:15 PM and we had to drive away. Went there the next day. Nice place in the woods. Many spots was not level - tillting to one side. All sites was partial hook up - dumpingstation on the way out.

Curvy paved roads. All back in sites. Many trees. My husband was upset to not have satellite tv. Close to Universal. Son and family stayed at Westgate Lakes. Easy roads between the two. Close to I4. Roads need edges patched. Very quiet in a busy town.

While the park is not open past five, I called and made reservations. The woman was very nice and said I would need a code if arriving after hours. The campground is nice. Some spaces larger than others. Worked perfect for our family who was visiting Universal Studios. It was less than 4 miles away.

| In the woods - know the opening hours!

Be aware of the opening hour - generely 8AM to 5PM. If you will be check in at a later time - do call, booking and prepay. That will give you an access code for the gates. Othervise the gates will be closed and you can't get in. We learned that the hard way 5:15 PM and we had to drive away. Went there the next day. Nice place in the woods. Many spots was not level - tillting to one side. All sites was partial hook up - dumpingstation on the way out.

Nice wooded, secure, quiet campground 5 minutes from Universal Orlando. Public nearby. We came in late at night and left early each morning, so didn't experience the park's amenities, but the bathhouse was clean. No fire rings and small paved areas, but very reasonable rate for full hookups.

Very quiet city park. Staff are friendly and efficient. Showers are super clean and the fishing is great. Reservations are hard to get due to parks popularity but very inexpensive.

Nice park, big lake, a swimming pool, tot lot, lots of big trees that provide nice shade and enough space between spots. The location is also good, close to Universal, however once you are inside the park, it seems like another world.

Stayed there 5 days while I went to Universal. Very convenient for that. The site was just ok, not too much out of level, but weird in that I had to raise one side in the back and both tires in the front of a Class C. The amenities were great and price very reasonable. They do not allow any campfires.

Back in spot fit our 40 foot Newmar. Beautiful setting with a lake view ,and lots of trees. Close to a very nice area of stores and restaurants.

Really close to Universal and Disney. The sites are nice but not very even so bring some leveling blocks. We had full hook up and it was great. The roads around the R.V. sites are rough and needing paved in places but just drive slow. Huge lake,pool and drone flying area if your into that is all very nice.We are coming back in the fall and will stay here for sure !

Beautiful spot under the threes. A lot of squirrel as neighbor's. At a walking distance from grocery. And last but not least, very friendly team at the reception desk. Down side: we've been told that skate wasn't allowed...., at least nearby the public picnic tables. 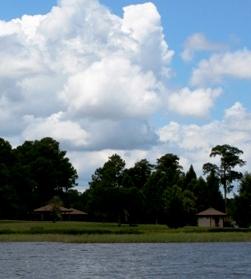