We stayed here two nights while working in Boise. Friendly staff, clean showers and bathrooms. Park was busy with working folks but everyone was nice and followed the rules. No fire pits as we were right next to the horse barns at the fairgrounds. You can walk right to the river to fish and the Greenbelt is next to the park for biking, walking and running. Very pet friendly. We stayed in a motorhome.

Good: Staff are very friendly. Sites are large in width but not in length. Sites are relatively level. Good water pressure. Bad: Gravel and dirt. Speed is supposed to be 5 MPH but not enforced; therefore, this place is a high dust bowl. When cooking outside, or eating outside, your food will get dust on it. WiFi is HORRIBLE. Right next door to the campground is a baseball stadium for their local team. Yelling, cheering, fireworks, etc. until around midnight nearly every night. Many people do not leash their dogs. Rules are not enforced - speeding and dogs in particular.

Great park, nice staff. Good facilities. Right next to greenbelt for plenty of outdoor fun. Wifi is ok if u can get a signal. No cable.

My husband and I enjoyed our stay here. We have a 36' with a 14' trailer for our motorcycles. The park itself is very nice. Clean facilities, friendly people & close to a lot of things we liked to do. Right next door to the fairgrounds, which offered horse races on Wednesday & weekend nights June through August. They have a area called the Golf course, which is all grass, but only electric & water. You also have to back in. Not fun for us. They have pull through's with grass area's & some with a concrete slab. Horseshoe pits on site, bicycle path very close, and the Boise river.

| Packed tight but close to Riverwalk

This park was completely FULL when we were there just after the 4th of July. Units Packed in tight, but park is close to Boise Riverwalk which we enjoyed. As a matter of fact, ambiance in park was so akin to a trailer park, we got out and walked the river trail as much as we could. Oh, and park is right next to fairgrounds and a stadium so if there is an event or a ballgame, you WILL hear it. Services all worked. We were near office so wifi was OK. Overall OK for passing through but would look for something a little less crowded next time.

We stayed 1 night and were located on the edge near the pedestrian path along the river which was shady and reasonably quiet.

Nice park! Gravel, 5 mph enforced. Cleanest showers and laundry we've ever seen! Lots to do in the area, close to shopping. Sprinklers at night.

| Our experience would not rate more stars

Undeveloped site - big hole in deep grass to trip in - power and water on wrong side of coach - needed a pull through, but got a bad back in site. Would have had to pay extra for sewer. Office staff messed up our reservation. We were only there 1 night, so we could not evaluate other park amenities. We would not come again.

Only stayed one night so I don t know that it s fair to judge too much. Check-in was a breeze, two very pleasant and helpful ladies ready, willing and able. We were escorted to our site by a guy in a cart who also helped us get the best positioning. Even though site is gravel, we were level side-side, which was nice. The electrical was a bit odd. Wife plugged into the 30-amp outlet, turned it on and the surge suppressor began to do it s thing. I didn t think about it until I tried to use an electrical outlet - no power. Surge protector showed an error. Turned power off and back on, same thing. Since I had a 30-50amp plug adaptor, I used it and plugged into the 50 amp and everything was fine. Not sure if it was me or a fluke or bad 30 amp outlet. One thing I found a little odd was instead of your tow vehicles being parked right next to your rig, it was on the other side of a cement slab used for tables, chairs, etc. So the tow vehicle ended up being parked right next to the neighbors rig. Not a problem, just seemed odd since we re still newbies. Anyway, all in all, a nice place. Oh yeah, their WiFi sucks! But they do tell you up front, it s for basics like email. 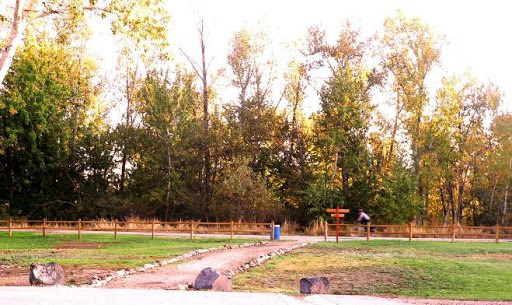