Had a great time. Very clean!! Watch out for the park rangers they are young with big heads are quick to correct you for for driving your cart after 10pm or cutting through to get to you RV spot. Anyway it's a blast and you won't be disappointed. It's April and the pools and slides are closed a bit of a bummer, but we shall be back!!

paid for 4 nites. had an emergency and had to leave after 1 nite. they refused my refund for the other 3 nites. reason was we dont have a procedure to refund money. so beware. i wont be back but ill pay per nite at mississippi parks.

Enjoyed our stay at this park. Very quiet and staff helpful and friendly. Would definitely come back.

Beautiful park. Landed by accident to find Crusin The Coast would be the next week. Were able to get a spot in park for a week, then moved to the first come/first serve on the beach. This park has new facilities. We would give it 5 stars, but the facilities were just plain filthy. With the park full (or not) the bathrooms should have been cleaned daily.

Reviews were mixed when I researched BSP. Being here for a few days now, I love it. Bathrooms are fine. hookups in premium sites are awesome. And they have a tough 18 hole disc golf course! Family friendly or just relaxing. Minutes from great seafood. I'll mark this park as a keeper! See ya next time!

The mosquitos and flying flea like bugs (that bite) were so bad, we left after two days of a planned six day stay. It was really too bad since the park does have some nice amenities. The staff were very friendly.

Met a large group for the weekend. The bugs were out at night but campsite was great in Treasure Cove area. Site 120 is good and ACROSS the road from the bathrooms.

Very friendly staff, park was neat and clean. Bath house and laundry were clean. The camp store and pool were closed for the winter, we were there in March. Very nice water park there also, would be great for kids. We stayed for a week, March 2015, 38' Class A with toad. Close to casinos also, if you are so inclined.

Had heard good things about Buccaneer, was just disappointed when we stayed. Made reservation and upon arrival site was too short for us. We were able to drive thru the park and did find a suitable site and moved. If you frequent the park and know the sites, I'm sure your experience would be much better, but most sites are short and slightly sloped so leveling would be an issue. Roads are narrow and you can see where others drive off the pavement in the turns and gravel filled the holes made during wet weather. Newly replaced facilities are nice but just wasn't what we expected. For Motorhomes, do suggest approaching the park via Lakeshore Drive to avoid the steep railroad tracks.

The place is ok but the small bugs are horrible! The are everywhere during the day and night.You can’t even sit outside. And at night time plus mosquitos. All people on RV just sitting inside. They didn’t say anything on the entrance. And you can’t cancel the days you paid for. Couldn’t stay here even a few hours.

We understand they’re rules for obvious reasons, however when staff members are constantly nagging you for things you aren’t even doing turns a peaceful getaway into a miserable stay. The bugs are terrible, most sites are way too close to one another, pieces of the playground are broken. Definitely will not be returning.

Paid for two nights “premium” spot on the beach. I understood no close restrooms in our location. Got up after a nice night sitting on the beach being eaten by every kind of deer fly, biting ant and chigger. (Ok, they have no control of that but off worked 2nd night. ) 9 am knock on door, water line broke water off for an hour. Ok, no control over that. Water back on in an hour and 2 hours later we pack up camp and go to use flush toilets and showers. DISGUSTING! Ok no water, got it close bathrooms, post signs, get port a potties. Nothing done and deer in headlight looks from all park employees I flagged down. Men’s equally bad plus husband had to spray down walls of stall to shower. When I went to the office they said unaware of any complaints. went back to site and hose was blown when pressure had been restored. Not 45. A night. Young, polite but high schoolers running office maybe good to take waterslide payments. If you have kids this might be an option. But we were not at all impressed with anything but the location .

Stayed here for Thanksgiving week. Quiet park, spacious spots, lots of walking areas. While it appears this park is geared to summer guests, the cool weather made for delightful camping. Showers were above average, climate controlled, good pressure, plenty of temperature range.if I could complain, it s the roads leading to park.

Decently spaced sites, clean facilities, nIce people. Read site description carefully when making reservation as large number of sites are not level - beware of slight incline . Biggest complaint is the biting bugs that are small enough to come thru screens. Had to stay inside with the windows shut and the air on but at least that dulled the train noise. We left 5 days early and will not stay again. 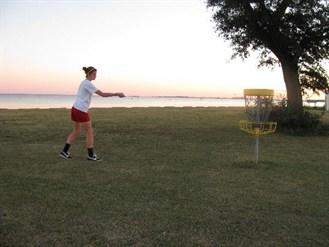