No rates reported for Butte KOA

Not far off the Interstate, but very little highway noise. Sites are more than adequate and level. Staff is very friendly and the on-site chicken restaurant is outstanding. Overall the park is much better than some of the previous comments.

Sorry but not a big fan of most KOA Parks but sometimes it's all you can find. Park is typical of KOA with high prices and tight gravel sites. No TV cable. WiFi is ok but limited. Small pool but does look clean. Is located near Old Town and I-90. I guess it is alright if you can't find anyplace else

| Decent stop for a night

Staff was nice and the facilities were kept. Nice walking trail nearby. Easy off I90 (not to much noise form either). Spots were a bit tight.

Sites were level with decent space in between. The facilities were okay, but the grounds could use some attention. The water pressure was low, the WiFi worthless, and there was no cable TV. I'm beginning to think this is the "usual" for KOA.

We got a long pull through site, that was nice. Grass at sites need water badly, very dry and brown. Pool was full of leaves but looked clean otherwise. I would not stay there again unless it was all that was available.

they say wifi don't work water pressure comes a goes and at 52.00 it should be wonderful

The one thing I don't like about KOA is they are out for the money. They pack as many campers as they can to the area. They never give you a choice of which space you want. Not to mention at this KOA there was a lot of highway noise and the smell of sewer nearby. The positive. Everything worked at the facility and the pool was clean. Did not use the restrooms.

The grounds could use some TLC. We’ve been to many KOAs that are aesthetically pleasing. Otherwise, all of the services were there and they must have improved the WiFi, because it was great. It is very close to I-90, in fact, we could see the traffic easily from our RV, but it did not keep us awake

We arrived fairly early, and when we got there they gave us a “dry spot” meaning no electrical or water because they were out of spaces and charged us for the same as if you did get those. Mosquitos all over. Pool was closed and they didn’t tell us when we arrived and paid for a spot. dryers were in the main building and so when they closed so did the washers and dryers. WiFi was terrible. But they do have showers and a dump station. Maybe it’s bad timing but our stay wasn’t all that pleasant

They were accommodating as they only had Water/Electric sites available. Not a bad KOA, but I got sick of people continually walking though my campsite even after me asking them not to. Also, site caddy-corner to me partied well after the 10PM quiet time. Didn't sleep much at all due to them. Trash cans too small, and were over flowing each morning and giving off a very strong smell.

Okay for an overnight stop. We have a little trouble getting level. It's in the city so there might be traffic (depending on the time of day) to travel to the park. We stayed here in a 27 ft trailer.

Easy to get to, open in October which was a huge plus for us! Wonderful walking path nearby. Passing through on our way to Glacier National Park!

Staff helpful, but the place is run down and the washrooms really grungy and unkept.

| If you re passing through, keep on going!

We had the dubious honor of staying at this KOA over July 4th. For being a valued KOA member we were given the tightest spot in the park. Today is July 5th, 2019 and this is the THIRD night of 4 hours of constant fireworks being shot very nearby, actually just behind the park. The fireworks sounded like they were shot right over the RV park. I ve never heard the constant explosions for FOUR HOURS uninterrupted until midnight for three straight days. I find this hard to write without sounding like a party pooper, I get it, it s July 4th and fireworks are a given. BUT THIS KOA SHOULD HAVE ADVISED US THAT THIS WOULD HAPPEN FOR THE ENTIRE 3 DAYS WE WERE HERE, . Besides that the park doesn t deserve three stars. Staff was nice, the Chicken Shack was fairly good. Gravel sites, WiFi was slow, sites were laid out Willy nilly, maybe I m cranky due to the lack of sleep, this is not a quiet park, lots of kids, if fireworks are your thing....you ll be in heaven here. ONE BRIGHT SPOT be sure visit the Front Street Market, it is a great little town treasure. 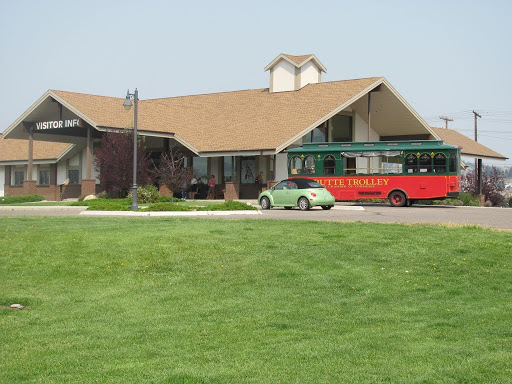