The pictures on the website are like a bad dating service, you know with the 20 yo hottie that in real life has gained 40 pounds and has a bit too much lip injection! We just left the place today after donating about 140 bucks. Our spot, number 23, was against the main road about 15 feet from the pavement. But! There was the quaint little picket fence between us and the road. The sewer pipe was broken. I now understand why some places have a 10 year old rule. The place was depressing. Broken down permanent trailers from years gone by with trash and even old cars in front to boot. The gate card has a $10 deposit attached and even though we gave the card back, I did not get the deposit back. Run from this place. I can not understand how this has a four star rating. The locals must be on the payroll for turd polishing.

The site and bath house were clean. The staff was friendly. The water and electrical services were on the wrong side of the camper. The electrical services were dead initially. I had to provide technical knowledge and tools to get it going. They wanted $3 extra dollars/day for cable. I was scared to try their Wi-Fi. They may have wanted to charge extra for that.

After reading some bad reviews, we were nervous about what we'd find here. We were pleasantly surprised. The office staff is friendly and very accommodating. The park is clean, sites are level & everything worked. We could walk anywhere we wanted to go. We travel a lot in our Class A and we would definitely come back. If you want perfectly manicured and lots of concrete everywhere, go spend more elsewhere.

We were had to evacuate and stayed here two nights. It was not bad at all for the price. There were a lot of stickers that got in the dogs paws but odiously they cannot help that. The only thing that would make me not come back would be the long walk in DEEP sand to the beach but when you get it it after about a quarter mile it's beautiful.

Worst campground we have ever stayed in. Noise was unbearable at night. No place to walk dogs without getting sand spurs all over them. Bath houses were fair. For the price we paid, it sure wasn't worth it. The only reason they are getting two stars is because the store was well stocked.

Spent three nights there. Hookups are on the wrong side of the rv, the sites are weeds and sand. Older park and needs to be updated. Over priced.

Great staff Terry went out of her way. What a great store from rv stuff to top of the line fishing gear beer wine etc

| In the heart of Panama City.

You can just walk to restaurants or entertainment. Across street from beach, although it's a long walk in deep sand. Staff are nice and accommodating. Located across street from Spinnakers restaurant. Located on Thomas Drive, lots of traffic. We were located towards the back, so noise wasn't bad. Bathrooms were clean. Nice pool. Camp store had lots of stuff, camp supplies, Food. I went in April, 2016" before Thunder Beach. Lol so traffic wasn't bad. I would go again.

Very accommodating when making reservations prior to stay. Site and campground were clean. Never used bathhouse, so can't comment. Laundromat was clean and up to date. Nice necessity grocery store and camping store. Walking distance to restaurants. Walmart and shopping close by. Activities planned for holidays. Was here for Christmas and New Year.

The location is nice but the CG was underwhelming. The baths were the nastiest, dirtiest most broken I have ever seen. Couldn't use them at all. Sites have little to no shade and lots of ruts and tree roots sticking up everywhere. The near by cottages are full of stumble drunks. Pool was nice but rules are unenforced. Cable TV service was awful. Cost was $60+ per nite but really not worth if. This is more of a $20. A nite CG. Overall, our experience was so-so. We would not stay here again.

Not bad. People very friendly at front desk. They have a fully stocked RV supply store. Short walk across street to beach. Camp sites were fairly clean, and bathrooms were clean. Stayed in space 28 with 34' motorhome with 14' trailer that I was able to keep connected. A Few cigarettes butts around but otherwise grounds were clean. Cable tv was ok but wifi was mostly unusable. Back of CG was mostly mobile homes. Located right near busy road so it might be too noisy for some. I liked it enough that I booked two more return trips before I checked out.

| A honest and fair review

As a family we've been here many times and continue to do so (have a few reservations still going this year). It's across the street from Club La Vela (if you don't know it's where MTV did spring break for years) so if a quite campsite is what you want this isn't it. It's not crazy noisy but you're camping in a city there's a small amusement park a block away and you hear people on the rides and driving. The restroom/showers could use some updating but other than people not cleaning up after themselves (I don't consider this the campgrounds fault) they are fine. I have a pop-up so I don't camp on the RV lots but I've noticed you have to run everything under your camper because of hook up locations. I've never been treated anything close to unfair and majority of everyone is friendly. I will continue to stay here as well. I've seen people call this place the "slums" I don't agree just like any other campground you get people who you wouldn't normally put yourself around. In closing if you're looking for a luxury resort that's quite and you can listen to silence this isn't for you but if you're looking for a family friendly campground close to the beach and attractions with a swimming pool you've found it. 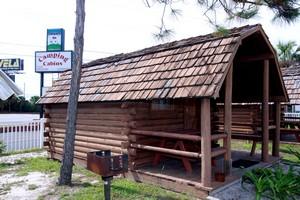