Best KOA on I 40 in OK. Very nice pull thru and back in spaces. Lots of trees, play ground, small pond and creek. Very clean and functional showers and restroom. Paved roads and far enough off I40 to not have much noise. With in walking distance to so-so restaurant. Prefect for overnight stay full hook ups

Two sides of story There is probably 20 spaces side by for long term occupation probably oil field works then there are separate space that are great, tree, picnic table full hook up pave road. Slabs are not all level but a great place to stay for a week or A night,

Hard to find, extremely close spaces, goat heads at campsites, several big dogs tied up and left unattended. We stayed here in July 2015 in a motorhome.

| Did good for an overnight stop

Arrived late afternoon after long day drive. Check in staff was very courteous. Sites were fairly level but very limited space between campers (had a pull through site). Cost was reasonable. Park was clean, as were the restrooms. Probably not a place I would spend a vacation, but it was perfect for an overnight stay.

| Not Great, But Not Bad

Paved drive and sites. Friendly, helpful staff. Cable TV was ok. WiFi slow, but that is everywhere. Worst thing was the little stickers which your dog got on its feed and brought into your rv. Would give a 4 if not for those little devils. Had some choice words for those things when I stepped on one with bare feet. Reasonable price and nice restaurant at top of the hill which included a 10% discount for those staying there. Oh yes, that restaurant had the best onion rings you will find anywhere. And if you have kids,which we do not, they have a great playground. You would rate it higher than me for that.

No place to walk your dog without stickers.

We've stayed at a number of KOA campgrounds. This was by far the worst, which was surprising because KOA is typically a great experience for RV travelers. First, I called ahead to make reservations and was told, "Well, I'm leaving in 5 minutes, so just fill out a card when you get here." Fine, we get there and there's almost no spaces left. Wouldn't much matter because even the prime spaces had RVs packed in like sardines. Bathrooms were closed, and based on the age of the paper sign on the door, they had been for awhile. To use the shower house, you have to have a code, but by 8:41 in the morning no one was in the office or answering the phone. Wish we never stopped there. Very expensive for the complete lack of open/ accessible amenities and lack of anyone to talk to at the KOA El Reno. Talked to KOA of America and they basically said sorry, but there wasn't much they could do about it. Usually KOAs are a good place to stop, but not this one. Avoid El Reno West, you'll be glad you did.

However, if you need a stop for one night, this place is ok. We explored the historic Route 66 that's near by (second longest bridge in OK) and had buffalo burgers at the Cherokee restaurant at the top of the KOA. Bonus: 10% off bill with KOA receipt (restaurant only.). Getting back to the campground is a little confusing. Follow the yellow arrows painted on the ground. If you're looking for a nice, relaxing spot to camp, keep searching ...

Staying overnight and too tired to go further. Super tiny spots, can't put out awnings even if we wanted to. Narrow strips of burnt grass, lots of pavement. Looks like lots of transient workers. Not worth $38/night with our KOA membership. Right near highway, and have to go thru truck stop parking lot to get here. Looks like maybe some nicer sites towards back but not giving out to overnighters even tho vacant. 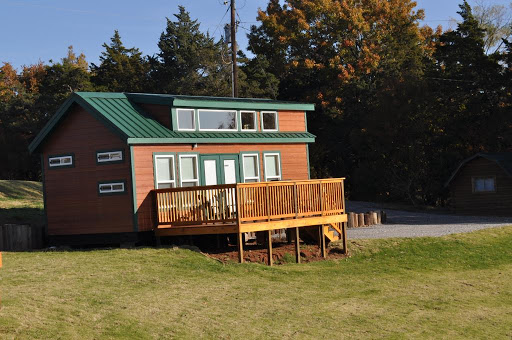