Nice folks, clean bathrooms and nice sites. small park but worth a stay.

We stayed here once in 2009. It was a lovely place to stay with friendly staff then. Not anymore. It's very rundown and in disrepair. There's junk cars and piles of trash lying about. Lots of junky permanent RVs and trailers. There was a German Shepherd tied outside one trailer that barked LOUDLY, non-stop. The owner had driven off that morning and left it there. I called ahead to get a reservation for one night and the man that answered was ride and said he was too busy to take a reservation. He sounded like he was a mess. We arrived after hours so we paid at the office the next morning. A very friendly lady was working then. So sad to see such a nice place waste away.

Tonight is our first night as full time RVers. Very nice people who run park. Had a couple of issues with Travel Trailer, owner came to site with meter and checked out my TT. Above and beyond, will stay here again. Nice pull through site, salt water swimming pool.

| OK for an overnight stay

Now everyone knows this is no longer a KOA, but we were looking for a place to spend one night while traveling. Paved road, but gravel sites. Ours was fairly level. Definitely not a destination park, but ok for what it is. Owner is a rather unique individual, but did not find him rude as some say, just unique with dry sense of humor. A little over priced. I paid $36 with GS discount.

Shady RV park. We requested full hook ups with a pull through site. We were assigned 05. There were full hook ups ; 50 amp electric, water, sewer , and cable is great condition. The folks were friendly that registered us. They assisted us by giving clear directions to stores for supplies. The bathrooms were immaculate and even had extra large shower head for comfort. There was a swimming pool for the kids and a small lake with paddle boats with ducks. The park was very serene and quiet.

| It is not your belived koa !

Nasty people are not nice

No longer a KOA. Was way to expensive for early March, despite military discount. Dog walk area was extremely muddy/soggy, did have doggy poo disposal but out of baggies. Would not recommend or stay here again

Very expensive. ..easy in and out...good directions. ..but thought it was a KOA.. was not. Rate too high.. $51.00 for overnight AND no other choise...Long pullthru but not level at all. Would not stay again Rate too high for January.

| Not quite KOA quality!

Seriously a 9.5 rating for facilities? Are you kidding me...come on Good Sam we expect more out of you. This place is lost in 1982. It is in such need up improvements and upgrades. The owners house is located on the property and looks like it should be torn down. There was a huge stack of old furniture in a burn pile out by the road leading to sites that are mostly long term residents. These sites are full of old campers that look dated and run down. We stayed in site B3 and it was flooded...my guess is that whoever runs the park doesn't do a site inspection before a new camper shows up.

Stayed there a week and half last September. They are now "Good Sams". Reference to earlier post about soggy dog walk, it's because their septic system overflows there, lol. (Serious). The owners are extremely rude! Good for a one nighter, that's it. Check Yelp and trip adviser, you'll see a lot of the same reviews.....

Staff nice and helpful. Pullthru for large motor home with towed jeep. Roads are narrow and curvy but manageable with care and slow speed. Only used electric 50 amp, all good. Husband said bathrooms and showers are large and clean. Easy in and out from I-49. Veterans discount and thank you always appreciated.

Below avg standards. Grass and dirt site a muddy mess after a night of rain. Fairly level site carved out of a hill. Sewer connection higher than our outlet on class A motor home. Quiet enough for an over night stay but not a long range destination. $45 for pull through with Good Sam way too high.

Nice swimming pool for the grands. Laundry area was nice we had a lot and they have 8 machines! Showers were clean. Camp sites could use a little TLC, ours was a pull thru and pretty level we are pulling a 32 5th wheel and the roads getting up to it were a little tight but maneuverable. Gal that checked us in was very nice as were the owners

Very little maintenance being done. Sites were close, hook-ups were very poor. Grass was not mowed and a torn up lawn chair discarded at the site. The picnic tables were worn out junk. Used to be a KOA, but not any longer. The pool looked ok. When we arrived, a group of people were lounging in the office eating and socializing, looked like the family just hangs out there. 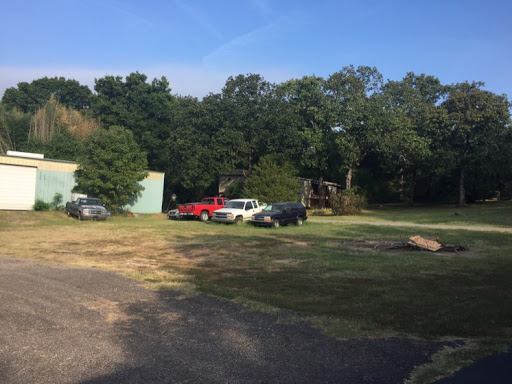