Owned by the descendants of John Wayne and it's starting to show its age. Office, store, laundry in need of some care. Most sites overlooking the water (on the other side of the road). We dry camped for a few days in the grass covered overflow area and it was just fine since we have solar. Didn't have WiFi at all. Centrally located to enjoy the local sights.

I had made the reservations in July and reserved spot 15. A few days before we showed up got a confirmation letter stating they were looking forward to seeing us and listed spot 15. When I showed up, they had me in spot 13 and couldn't tell me why the change...and to make matters worse, there was someone in spot 13 but they weren't in their rig so they had to find me somewhere else. Spot 13/15 was a pull through on the 2nd row. The spot I got was a back in on the 4th row...Although my view of the bay was completely blocked, the spot we had at least was butted up against the forest with grass behind us...so we had more room. Nothing spectacular about the sites. Gravel, no trees. Being across the street from the bay was nice. Made it easy to launch our kayak. Would probably come back.

| Nice spot on a nice cove

We called the day before and got a 2 day spot. Basic hookups, but the view and locale is what you are paying for. Park across the street from the RV park has benches and a grassy hillside that we spent an entire day watching the cove and day visitors. Ultra quiet at night, plenty of places to eat out. Could not have been better! We will be back!

| Read the review in full!

Do not stay at this RV park until they change their BS policy of charging for the ladies' showers and not the men's. It's clear they're trying their best to obscure and hide this. My boyfriend and I stayed here for two nights for my birthday. First of all, this RV park is not worth its cost, especially when you compare others in the region. We've stayed at Little Creek many times for either the same price or much less, depending on the time of year. This RV park doesn't have 50 amp service, the spots are very unlevel, there isn't very much "personal space" for most RVs (the spots are inconsistently sized), and it's not as pretty as their website makes it look. If you walk down to the waterfront it's nice, but I'm not reviewing the marina here. So, we went to take showers, and we saw on the men's door there is a sign that tells the "ladies" to not use the men's showers. I thought this was just sort of funny and assumed it was an issue with women using the men's when the ladies' room was full. When I went in and saw the showers were coin operated ($1 for 10 minutes), I obviously became suspicious. I turned on the water, thinking perhaps it was a system they hadn't removed yet but didn't do anything. Because NOTHING was said on the website, at check-in, or on their long list of rules about coin operated showers (because they're trying very hard to pretend this isn't happening). The water was completely frigid after a few minutes, so I called my boyfriend to ask if his shower was coin operated. It wasn't! He sent me a picture of the wall, and there are indentations in the shape of a box about the same size as the coin operation boxes in the womens bathroom, with some mounting holes. I suspect the men's showers used to be coin operated and aren't anymore. Very nice. I don't care if the explanation is "well, women take longer showers, so..." LOL OK. Then charge for both or limit the shower time. What you're doing right now is so problematic, I can't believe I have to even say something about it. This park was one of the most expensive places we've stayed in Washington, and it was by far the worst. Their website is pretty good, so it really tricks you, but the second I showed up, I regretted choosing this for my birthday. I'm pretty sure the costs of this RV park are somehow subsidizing the marina because if you walk over there, it's like a completely different world. The power setup looks like a disaster just waiting for the right moment to explode. The poles are completely rusted, and one of them is at maybe a 30 degree angle, so I give it about two weeks. I don't care they don't have all the perks or whatever, but this RV park feels like a shiny lie just to get a few extra bucks from people who don't realize what they're going to be getting. You can stay for less money at way better places that won't potentially catch fire because wires are connected in what looks like a rusty junction box without a cover. Go stay at those places instead of here. The sneakiness of it all is so insulting and unbelievable. There are so many rules and postings everywhere, but somehow this one thing slips through? I didn't even have quarters when I went to shower, so I would have had to leave and get them anyway. I don't know how closely the marina and RV park are connected on the business side, but I heavily suspect there are public funds somehow involved. I'll be looking into it. I don't love being the "my taxes shouldn't pay for X" person, but my taxes shouldn't even partially subsidize the stupidest, sneakiest manifestation of sexism I've ever personally seen. 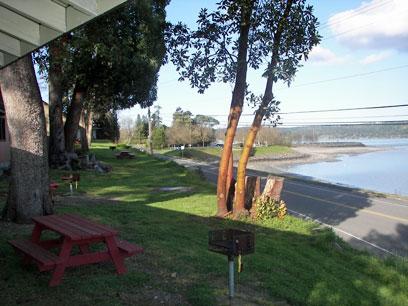