| Forget this Place if you have a Dog

At first this seemed like a great park. Large lots but not picnic tables. The grounds, however, are filled with sharp stones to and from the RV. We tried to walk our dog on these stones to let her go to the bathroom but it was painful. Then after 2 weeks, we were called to say it was reported that we were not picking up after our dog and not putting it on leash. These accusations were false and I told them that. Then we got another phone call that we were hooking up our dog outside and that they have pictures of our leash on the door handle. They didn't have a picture of the dog attached to the leash of course. Then the owner came to our door and told us they would let us stay if we kept the dog inside at all times except to walk them to the bathroom. We were amazed that after 2 weeks they decided something was wrong. The owner's son saw us many times and stopped and talked nicely to us before this even while we had the dog outside on the leach and never said anything. We believe one of the permanent residents across from us reported us and probably saw the dog outside for a split second while we were putting on her leash. Regardless, the way we were treated in the end was unacceptable. They act nicely until they can find something wrong - with no proof - and then threaten to remove you from their parks. Never will return to this park.

My husband and I visited Lafon's on 3/12/16 to inquire about a short term RV lot rental for the spring and summer months this year. We are Dallas county residents and wanted to locate an RV park site close to home to utilize on the weekends for the purpose of getting away from the busy city. We were greeted in the office by a very friendly and exceedingly talkative owner/operator, A. A was extremely congenial, engaging us immediately after we walked into the office with several stories of his past, one of which regarded a family he knew that his family utilized to pick cotton on their farm, inquiring of us on the heels of that reflection of his past as to whether my husband or I had "ever touched a black person's hair". Then, he commented on what he considered the "wiry" texture of African American hair. It was a very strange thing for anyone to decide to share, or comment on -especially a complete stranger. While the "black hair" comment and story about 'cotton picking' felt inappropriate and out-of-step, we chose to give benefit of doubt because Alvin seemed to be a genuinely friendly person. While A continued to talk to us, we inquired of is wife and clerk -positioned behind the counter- about the park amenities and availability of RV spaces. We were told by his wife that there was an RV space that would be vacated soon and available in April. We expressed that while we were undecided, we were definitely interested, and that we needed to take some time to discuss it further between us to make sure it was a workable plan for us. We were told that the spaces fill quickly and tend to stay full. (Lafon's apparently has a majority of lots that are being rented by folks who live full time in their RV's and as such they don't have that many vacancies come up). Given that information, we asked A's wife about whether they required a deposit to secure the RV space she said would be coming available. We were told by her, with A standing at next to us, and still very eager to share his stories, (talking about people he has hired from his RV park to work his fire work stand, etc., and able to hear very clearly our inquiries about the park, and the responses to our inquiries from his wife), that we could secure the lot with a deposit, adding that we could just call them and let them know our decision. What was NOT communicated by either A's wife, A, or the young lady working at the counter, was that they would refuse to return the deposit. That's 3 Lafon representatives, standing within inches of us, hearing every word of the conversation regarding the deposit, and not one of them chose to inform us that the deposit was non refundable. We certainly would not have committed to a 100.00 deposit if we had been made aware that they would not return it if our decision was not to rent the space. What is obvious to us, today, after my husband called to decline the space, is that we were manipulated. It seemed very likely - based on what the young lady/Lafon's clerk responded with when my husband informed that we would not be renting the space, and then ask how they would be refunding the deposit, that they are in a regular scam-habit of making money this way. When the young lady told my husband on the phone today that the deposit would not be returned, adding that Alvin/his wife "should have told us that", we knew we had been had. We would never recommend this park to anyone. The funny part of our brief, very negative Lafon's experience is, it reminds us of an old song by the Temptations titled, "Smiling Faces Sometimes": Smiling faces, Smiling Faces, Sometimes they don't tell the truth. Smiling faces, smiling faces tell lies and I got proof. Beware. Beware of the handshake that hides the snake, I'm tellin' you beware of the pat on the back it just might hold you back. I tell you you can't see behind Smiling faces, Smiling Faces, Sometimes they don't tell the truth. Smiling faces, smiling faces tell lies and I got proof. Your enemy won't do you no harm, 'cause you'll know where he's comin' from; don't let the handshake and the smile fool ya. Take my advice I'm only tryin' to school ya." Moral to this review: Steer Clear of Lafon's.

moved in here 6/7/15 and before I moved, I called to make sure the park was family friendly and asked if they charged extra for additional people because I had five kids. They were incredibly friendly over the phone and told me there were several families, even some who homeschooled. Today, 6/19/15 the owner, Alvin, came to my door, told me that I could not have 5 children here and that I KNEW that and I had 72 hours to leave. After crying my eyes out, I looked at my "lease" agreement which INDEED stated 7 people, I called and talked to the lady in the office. I asked her how he could tell me to leave because of this and she ignored me, telling me she would fill out the violation form and deliver it to me. When I asked her exactly what violation I had committed, she would not tell me. I called back a while later to speak with Alvin again to ask him what was the violation and he refused to tell me, stating that he didn't have to but there was a "multitude" of reasons. I assume he will create this multitude of reasons in response to this review or if I take him to court which it's not even worth because I am disgusted by these people now. When I told him that I was being discriminated against because I had 5 children, he told me that was my problem and hung up on me while I was still talking. This man is incredibly rude and this park is NOT friendly OR FAMILY friendly AT ALL.

We have been full-timers for almost 5 years. This is the FIRST time we ve had a a background check, and for only 3 nights!! The parks are beautifully green, with growing trees in the newest, where we stayed, but only 1of the 3 campgrounds had a laundry facility! There were 4 washers (2 out of order!) and 4 dryers, and no restrooms or showers!! The park has mainly full time residents and they re not the most friendly. We got overrun with ants and the bugs seem to be an ongoing problem there. WiFi was terrible. I would avoid this campground! 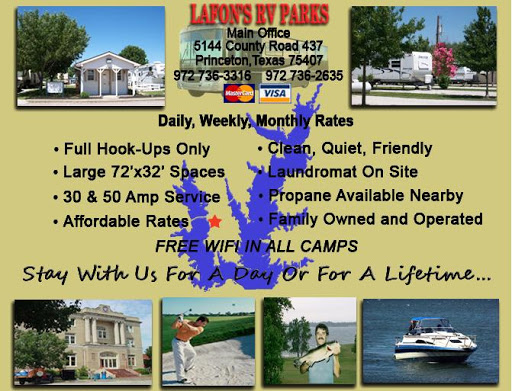