Great place..nice sites..not so level had a hard time leveling..but otherwise we had an excellent stay..what can I say Carol the Ambassador was awesome..we'd come back just to visit her.. One bad note was..the person that checked me in..charged me double for one adult..and charged me for children under five...after I just finished telling her whom I brought..she sent me the wrong way to my site..that was frustrating..I had to go back to the beginning and ask for an escort..she wasn't too knowledgeable about much...

We were assigned an end, gravel, 50 amp, FHU pull-thru site (#60) with lots of foliage and trees. When we pulled up to our site, we were impressed until we tried to level. What normally takes 5 minutes took us over an hr. to level as the site was sloped. Once we got through that, the site was great. We had no neighbors on one side, a wooded view out the front, and plenty of space. Other sites appeared more level, so not all the sites are bad. The WiFi was excellent. The cable had limited channels. Good Verizon cell service. Friendly, efficient check-in. Typical KOA with lots for kids/families to do. Easy in and out to our site. We would stay again, but not on site #60. We stayed in a motorhome.

Site was nice and spacious however it was tight getting into. Laundry was nice but expensive. Bath house was average

We've been to about 25 KOA's. This one it's being managed very well. Gravel, level sites. Clean facilities, and lots to do with the kids. Not sure why it's called New York City North/ Newburgh... an hour north of NYC in the southern edge of the Catskills.... if in town, well stay again.

We stayed here the weekend after the fourth of July and had a great time. The campground has some varied sites but we were put in a section that was nice and quiet away from most activity. They have a church service Sunday morning during the summer led by two of the college kids that work there and it was great to attend. They have alot of activities planned for kids which our kids really enjoyed. We also took the NY City tour that leaves from the campground and would highly recommend it. Not having to drive and deal with site planning and driving was extremely nice. The staff was great and always helpful. We also explored West Point which has a really nice free museum with some great history. Also check out the Orange County Chopper store which is in Newburgh and has some really cool bikes displayed. We would highly recommend this park.

We stayed only one night on November 1st, and found the park quiet (as far as road and train noise), and wooded. We didn’t set up our satellite, but think it would be challenging to receive a signal here, but they do have cable TV with a limited number of channels. Our site was a level crushed stone pull thru and it was good size for my 39 foot fifth wheel and truck. You also have space between you and your neighbor.

I would recommend this campground

Stayed here for one night, it was raining pretty hard upon our arrival and the first spot we were assigned was occupied (they apparently had complained about their location and were supposed to move sites the night before). Went back to the office and were given a second site and it was also occupied. We pulled into the first available site we saw (it was still pouring down) so we didn t have to make a another lap, but when we went to the office they said that site was reserved. We were given a third site and walked over to ensure it was open before moving our RV. Had they used the traditional KOA escort, we may have been able to avoid a lot of inconvenience and getting soaked to the bone. Giving 4 stars because a staff member did come by later to refund our first (and only) night stay. Also, the final site we were given had full hookups (W/E/S/C), we had reserved only W/E. The campground looked nice, but we only used the bathroom facilities while there.

Nice wooded lots with more than adequate space. Clean restrooms/showers and laundry. Friendly staff. All the right things for the kids. Would definitely stay again.

Campground was ok and a good place for family. Wifi was good although we were unable to use our dish TV due to heavily wooded areas. Main complaint is the TV cable lineup had limited channels and the fox news channel was noticeably absent as was the sound on the local fox channel!

| Definitely not worth the money

Overpriced for what you get. Back in sites are tight and too short to easily park your car in front of your rig. Crappy moldy picnic table. Virtually unusable internet. The only reason this place survives is because the is very little competition in the area. Definitely not big rig friendly

We had a premium site so we were happy. Cement pad patio furniture a glider rocker and fire pit. After walking around, I'm not sure I would give 4 stars if we had a different site. Very crowded. No stones, just dirt. Amenities for kids were average. Goose poop everywhere. Bath house was 2 stars one night and 1 star the next. Guess it all depends on who goes before you. 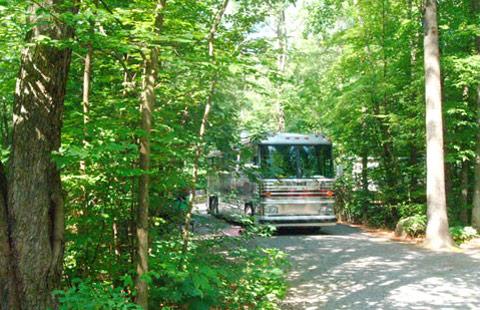