We spent 2 weeks there and this campground is definitely one of our favorites. Quiet, beautiful, big trees, great restaurants around and still kinda close to SF. Wifi is beyond terrible and large majority of the spots don't have a sewer, that's why we rated it with 4 stars. With these things, it would be absolutely perfect.

We're camping in the olema park for 4 nights already and it's just beautiful and great. Tha staff are very nice and it's big enough to have a little privacy, the showers and restrooms are very clean and the nature around the park is amazing!

| We will be back

A very nice campground and one of the best places to stay. A deli and a good restaurant about two blocks away. Point Reyes Station only 5 mins away. A great base camp for site seeing and hiking.

| Not So Good An Experience

Stayed night of Friday, 3/27/15. Nice location with beautiful scenery. Was supposed to have a 50 amp power service, but when we went to hook up it was only 30 amp. No big deal, didn't need full power - but you would think you would get what you paid for. Upon check in, we noticed that they must have had some flooding issues, as there were sand bags & hay bales stacked all around the office area. Asked about it and they confirmed this. Next morning our power outlet (from the park 30 amp outlet) kept tripping in & out. I checked the parks circuit breaker but it was not tripped. I unplugged and went to the office for assistance, but they were closed until 9:00. When they opened the office I explained what had happened and they came and looked at the situation, but could find nothing wrong. By this time it was 9:45 a.m., and this was really messing up our itinerary as we had planned on getting up on Saturday morning and doing laundry after 2 weeks of traveling before getting back on the road. We decided to proceed and started doing the washing, but then had issues with the bill/coin changer - another trip to the office for change, but the manager said he was short of quarters and came back to the laundry & he was able to finally get the changer to work. I saw that this whole ordeal was eating up time so I asked the manager if we could move our check-out to 12:30, but he was very reluctant to do this. So, I asked him for a partial refund but he would not do that either. After haggling back & forth he told me he would give me until 12:15 to get the site vacated. Now I'm a reasonable person, but after the power issue, and having to wait for service you would think they could have been a little more understanding, and work with us. By the way, the power issue is on them, our system was working fine before we arrived at their park, and has been working fine since we left their park. I believe the flooding has screwed up their electrical system, or their system is so old that it is starting to have pockets of failures. This place was really filthy - when you go into the office there are spider webs everywhere, and it is really nasty in the laundry as well, spider webs everywhere, and dead bugs lying all over the light fixtures, floors, etc... - also, on Friday night when I went for my walk, there were what appeared to be hikers airing up air bags and preparing beds on on the sidewalk in front of the office. Later I went to use the park restroom (there appears to only be one), and the floor and sink had water and mud everywhere, as if someone had taken a sink bath in there. So, I guess I can pay $50.00 for a full hook up site that is not 50 amp (but was supposed to be), and doesn't even work properly - yet the hikers can sleep on the sidewalk and use the restroom for a bath. We won't be coming back to this park.

We wanted a place close to San Francisco so we could sightsee during our stay but there s so much to do here and the scenery is just gorgeous we contemplated changing our plans! Park is nice, they moved us from 30 to 50 amps by request. Laundry services are better than many parks we have been to. Bad weather has lots of mud and puddles but that s to be expected. 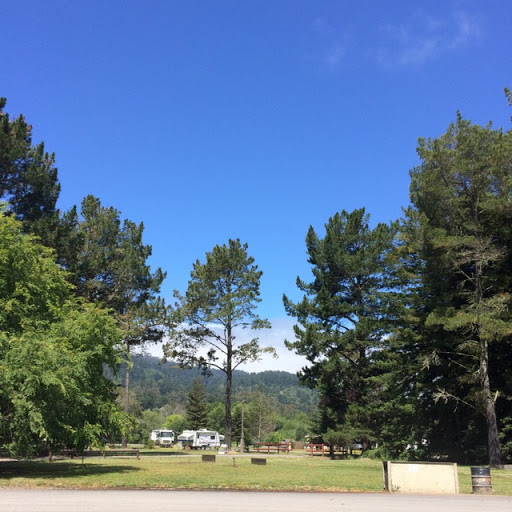