Just to be very honest....,,"This place SUCKS", if you stay here your very stupid.

Reasonably priced, easy access to I10. Quiet park on the edge of town. Owner and managers are very friendly. Clean and well kept, spacious lots. Would definitely recommend!

We spent the winter at this RV park, and for numerous reasons truly cannot recommend it at all. When we called to reserve, we spoke with the owner. We made it known that the reason we had chosen their park over others was because it offered wifi throughout the park. Not once did the owner say anything about there being a daily limit of 250mb. We found that out once we arrived and had paid our seasonal fee. ☹ We also learned at that time that we could not stream or download - "period." Even though they gave us a list of web sites that helped you measure you usage, none of the sites were compatible with our Apple products. So we had no way of knowing when we were near the daily limit. During our first weekend there, we were kicked off the wifi for going over the limit and we remained blocked for several days. We learned that the owner blocks you for an equal amount of time based on how much you went over on the daily usage allowance. Over the 5 months we spent there, we had very little access to their wifi and in fact had to increase our personal AT&T data plan in order to stay connected and pay our bills. The water pressure in the park is virtually non-existent, and the water quality is awful. We were warned not to drink it because one of the other guests had gotten kidney stones from all the salt and sand it contained. Anyone staying here on a seasonal or monthly basis had better keep an eye on their electric usage. Read your meter so you know you're being charged the right amount. The managers were very sour people, and they had an ongoing, open war with one of the other park guests. When those seasonal guests left the park to join an RV rally for a few days, the managers actually rented out their site, which they'd already paid for. So they double dipped on the rent. If you have a dog, they expect you to take them out of the park to do their business. It didn't make any difference to them whether you cleaned up after your pet or not, your pet was not welcome to walk within the park. In February when it was just beginning to get warm, one guest's dog died from a rattlesnake bite while walking in the area behind the park. The management never alerted any of the other guests to careful with their pets. Our water heater went out while we were there, and when my husband went up to the clubhouse to take a shower, the managers tried to charge him $2 even though we were seasonal guests. The last month we were there, they moved an RV in next to us and the owners put up a large lean-to style tent between our units. It was so big that we could not sit at our kitchen table without hearing their conversations or radio programs. We learned the hard way that, at Park Place, it's all about the $$$$. They are not customer focused, and really do not care about your concerns.

We stayed at Park Place RV Park for 5 months in a Motor home(we were booked and paid for 6 months, but left early) during the 2015-2016 winter. My first suggestion is don't ever reserve and pay in advance here! During 9 years of full-time RVing, we've never experienced such a hostile environment before. In less than a week, we wanted to get a refund and leave but we were refused. PROS: Recommended for overnight only........Conveniently located from I-10, Large sites, Quiet end of town. Clotheslines available for use. CONS: WIFI is often slow and limited to 250 MB a day (Owner personally monitors and “Denies Access” if you go over). Very few 50 amp hookups. Dust is bad because speed limit isn't enforced. Even though we paid for 6 months when we arrived, we went to a Rally on the desert for a week or so. We returned to visit friends and found our site rented! The owner said he could tell them to move, putting us in the position of being the bad guys, if we agreed. Not to mention, that we would have to sit around and wait for the people occupying our site to pack up so they could move etc. Bring bottled water for drinking and cooking. The other campers don't recommend the Park water. You are not allowed to exercise your generator. It is recommended that you do so every 4-6 weeks, so either risk issues or you will have to pack-up, unhook and go outside of the Park to take care of that. People were chastised for running their Diesel engine to air-up and re-level, “that's not allowed, it is the same thing as running a generator.” Not at all pet friendly (dogs referred to as a “G**Damn dog” by a manager) he displays such hatred toward dogs, nothing can fix that. You are told to walk your dog in filthy and unsafe areas (if able???). No Campground Restrooms, there's 1 shower and 1 toilet in Clubhouse area. You will be charged $2.00 to take a shower! Laundry has 2 washers and 3 dryers. Laundry, restroom and showers are locked during the hours of 6 pm - 8 am. NOT ADA compliant. Refused admittance of a Service Animal. Requested a Service Animals' papers to copy and keep in the office for their records. Both acts are illegal. The manager quotes ADA rules and Regulations from a man at the “Sanitation Department.” I have that in writing, signed by the Manager!Someone might want to make it clear to her that the Sanitation Department is in charge of Sewage and Garbage. Package recipients were overcharged (there is a reasonable fee, they charged more than double), they could not be reasoned with, when we tried to explain that they were misreading the charges. After that, we were made to feel unwelcome, they nitpicked, looking for something to harass us about, while ignoring the same small issue on other campers lots. The last 3 months I felt threatened. Work-campers seldom return, especially those with dogs (someone needs to look into the reason for that). In my opinion, the managers manipulate the owner with lies. In conclusion: The Managers have gone out of their way to make this a miserable experience. I define what they do as targeted harassment. Unless you enjoy having someone stand in front of you, smiling while they lie to you repeatedly, or if you like walking on eggshells constantly because a manager likes to throw his weight around. We'd recommend you avoid this park for anything more than an overnight stop, until the Management changes.

This place has a quirky charm, wide mix of ages but quiet and peaceful most times.

| Okay for an overnight.

Picked this place because it was Passport America and easy to get to. It's just a gravel parking lot with power, water, & sewer and nothing more. Weak wifi almost useless and the park was nearly empty too. Wouldn't mind it so much if they didn't call it a resort. Not friendly here either. Won't be back. 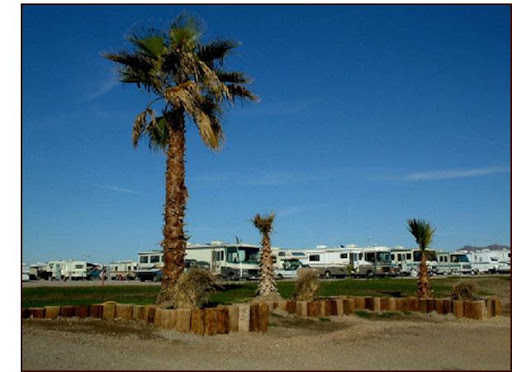