No rates reported for Pueblo KOA

I don't know how other campers came in, but I did not encounter hairpin turns, low bridges, or an abundance of pot holes. We stayed 2 nights and visited the Great Sand Dunes National Park (which was pretty cool). This is a very nice park. The staff is friendly and helpful. We would definitely stay again.

We stayed here for 4 days. Very clean and very nice customer service and very help full. Our water lines froze and one of the guys came out to give a hand and had some really good ideas, so it doesn't happen again. We had a good view of the mountains on one side and on the other was the highway, and it's just far enough away that you don't hear the traffic.

We stayed for 3 days in a private patio (fenced) site which was awesome for our large dog. Very clean park, clean laundry facilities. Beautiful views of Pikes Peak. Great Wifi even though our site was very far from the office. Friendly staff.

Great staff, facility isn't bad, but I agree about the access. Not for larger rigs. Hair raising, to say the least. And, the prices are higher than listed here. That said, given the heat wave we were traveling during, the air conditioning was worth it. Wifi worked too, which is always a plus if you need to get in a little work.

I will begin with the good; the staff. They are very kind and accommodating. Now for the rest of the story: if you are a class A with a tow, keep on going, especially if you are north bound. We encountered a very narrow, single lane, tunnel that is 13'3 that goes under the highway. You encounter this immediately after a 90 degree turn & that's just the beginning of the rats maze!! The park is poorly planned out & a series of twists & turns, a big rig nightmare!! The site was level, however, it was poorly designed as it takes 3 or 4 hoses to reach the dump. Major pot holes during exit & once again, the rat maze. The price for sites is not represented properly on this app. They are much more expensive & definitely NOT WORTH IT!! I would definitely choose a rest area over this park, if you are a big rig !!

This park is very nice but has excessive noise from highway and trains all night. Paid $51 for the night which is way to high compared to other KOA parks I've stayed in. The staff were very nice and accommodating. Probably won't stay here again because of noice and price.

My husband & I moved here and stayed for 1night while we looked for a monthly spot. Mike went above & beyond to move reservations around to accommodate us. We'll be here for a few months & if we're ever back in the area we'll make sure to stop back by. Very well kept park. Large dog run& clean laundry facilities.

It's a KOA and its in Pueblo, well not actually in Pueblo but close. Given that it's actually a nice place to stop. Very clean, easy access and very friendly management.

Friendly staff and fairly spacious spots. Very convenient access on and off of I-25. We did not experience the road noise that others mentioned in their reviews. The one-way tunnel was not a problem for our 25 foot rig. We would definitely stay there again.

Cost was $62 for one night with 4 kids. $52 base price. Campground was clean but nothing fancy. Ok for overnight stop but I wouldn t stay here for any longer.

| Fine for one night

You have to pay extra to rent a fire pit. Pool and jumping pad were not open yet (no biggie to us). Tether ball didn t have a ball on it, assuming maybe that s seasonal. Hot tub isn t a commercial tub and there was already a couple in it, so we didn t get in. Dog park is HUGE - the dogs loved it! But, it s pretty far away from the camp sites, back behind where people store their campers. I personally didn t feel safe bringing the dogs all the way out there by myself. They said they didn t have a site to accommodate us with our toad attached, so we had to unhook. When we went to pull in to the spot they assigned us, it was occupied. They finally got us into a site, which was large enough to accommodate us with our toad attached, so we re-hooked up. It was annoying that we had to unhook for no reason, and it took them 3 tries to get us into a site. Overall though, park was clean. Gravel. Level. We would not choose to stay here again, but it s a fine place for a one night stop.

Even though the price was a little more than I would have paid, it was less than compared to others in the area. VERY helpful staff. And the bonus: they have a pizza place in the office that delivers to your site!!! After an exhausting day on the road that was heaven! Sites are acceptable.

| Don't come if Class A towing

I always like to say something nice, so I'll say something nice. The gal at the office was very nice, and the grounds are clean. Now for the rest. We were a class A towing. The hook ups are at the far end of the site. Ended up having to unhook, which was a giant pain for us, as we were just staying for a night's rest, and needed to get out early in the morning. I would never had booked here if I knew I'd have to unhook. Also not a good park if you have dogs that need grass to potty. There are a few grassy patches, that's it. There is a fenced dog park but all dirt. Mosquitos. Wow, those buggers were so big they'll pick you up and carry you off! And there's *lots of them.* Finally, although this is not the park's fault, I was approached by a sketchy dude while walking my dogs. A woman approached me after I walked away some, and asked if he had been weird with me. I said yes. She said he'd been following her around all day. He had led me out a ways a bit to show me where I could try to potty my dogs. She said when she saw that, she watched, and was about to call the office (but I turned around and came back closer to camp). I was too afraid after that to go outside again. This just wasn't a very nice experience at all. 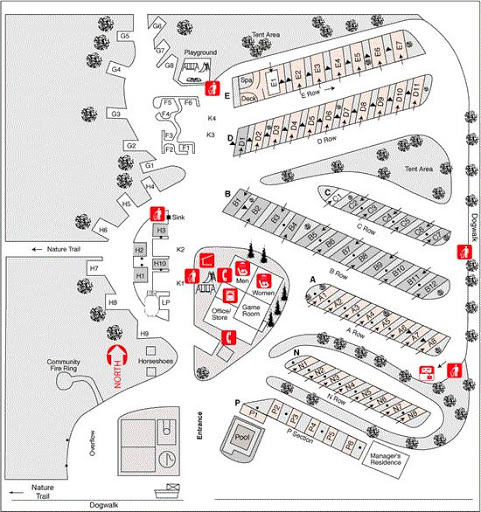