Continued - wifi isn't working ( not sure it ever does). paid for cable ( no antenna tv). 3 channels have dots all over (CBS is one of them). No cell service either. They assign spots even though there are only 15 rv's here. They put overnighter right next to another rv, they put one motor home on the back row so he had to unhook his toad. And because they are side by side hookups he had to pull in nose first. 3 washing machines didn't work and when we told them they said they knew about it. My hubby told them it would be nice if they would put a sign on them as he had put money in one and lost it. They said he would have to contact the company, they couldn't issue refunds. They need training on what to do when the park is empty and how to assign spots when they have to. As I said previously I would not stay here again and $40/night is ridiculous.

Just spent seven days at this KOA. What can I say..this is one of the worse KOA parks I have even stayed in. All gravel roads, sites are very tight and not even close to being level. The WiFi is a joke. The pool is nice and restrooms are okay. Bottom line...never again in this park..

Staff was friendly and helpful. Spaces are tight and not everyone gets a fire pit, but we had a good stay. I didn't find the highway noise to be as bad as some others have claimed. My site was level, and the WiFi worked fine. Follow their directions as iPhone maps will lead you down a crappy old dirt road.

The sites are gravel and not flat as a pancake but I can live (easily) with it. The park seems to be reasonably maintained and very clean. The staff we have dealt with are friendly and helpful. It's close to the places we want to visit so it's a winner to be sure.

| Kind of crappy, no privacy, wifi down, bad cell/hotspot reception.

Lots are much shorter than advertised, close together, and ZERO privacy. They actually make you park with every other motorhome facing the same way--so your door opens to face your neighbor, and you have to share a picnic table! Office looked dumpy, and the wifi was out for an indeterminate time, but " at least the next two weeks". They said it was because a new store was being built--what does that have to do with anything? Unless the building with the wifi burned down, there shouldn't be any reason to have no wifi for weeks on end. Maybe they didn't pay their wifi bill? They obviously knew the wifi would be down when we booked over the phone the day before, but they only told us AFTER we checked in. (Completely inexcusable. It's 2014--most people want wifi.) They gave us two dollars off, but who cares, when you work online? I could barely get a signal with my verizon hotspot, and it was spotty at best, because you're surrounded by mountains. So I lost a whole day's work. (Oh, and their wifi is only designed for "web surfing and email. Translation: super slow internet.) Can't speak to the rest of the facilities, because after seeing the lame, empty, run down office/"gameroom", I didn't even want to look at the bathrooms or pool. I'm not saying I'd never stay here again, but I'd certainly look harder for other options. It's not a bad park, but it was off-putting, especially the wifi situation. I really felt taken advantage of. A lot of RVers depend on wifi for income, so the deceit was unacceptable. If you don't care about good wifi and cell phone service, and don't care if you are nose-to-nose with your neighbor, you might like this park a lot more than I did.

| Not a good park

Lots are side by sides and the one they put us on had a quick 3' drop off. We told them with our Hensley hitch that we needed a more level lot. They said there were only 2 lots available for Coast to Coast even though the park is empty. We took the other one but because of the drop off we had to pull forward so we couldn't stay hooked up. Not sure if it was worth the $14/night which is the Coast to Coast fee but definitely not worth the $40/night they charge others. Will not stay here again, which is probably why they are empty.

Don’t expect wifi. The service is so bad that they shouldn’t even advertise having wifi. The pool is much smaller than the picture makes it appear. Right by the interstate and can hear traffic.

We are two rigs traveling together. We made reservations months ago telling them our size and that we were together. Upon arrival they put us in different sites far from one another. Our slides are 12" from our neighbors. Their told us no refund if we leave. We are RPI. Is that why we got this bad treatment?

Stayed 4 nights in a small travel trailer. Pros: friendly staff Great views Decent bath house Pool Cons : uneven sites Extremely snug sites Noisy Other guests park in your space Overall, not worth the money. KOA has really let itself go over the years. If the other area parks were not full, I would have moved. 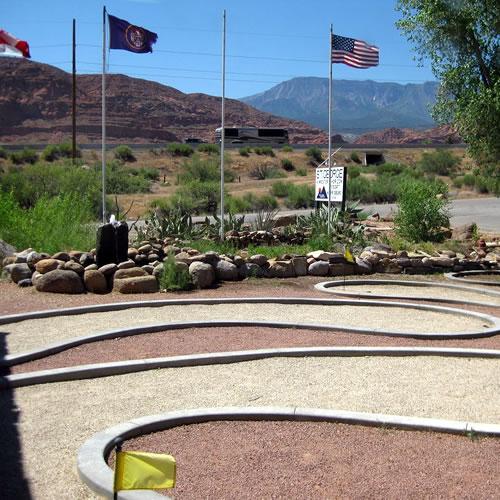