No rates reported for St. John's RV Park and Storage

Barb in office was very nice. Neat,simple campground. Mostly residents in homes. All utilities worked. They have 30&50amp.full. Clean,shady and grassy. Cement picnic tables. We were level in site A1. Trash bins everywhere. Will return if in area again. Camped in a 38' Class A with tow.

After looking at reviews on this site I almost didn't reserve. Then I went to google and there are 54 reviews. Most were very good. They all agreed temp sites got muddy in the rain but that is Florida. Most stays were recent also.

terrible. pull throughs in a muddy field and afraid we wouldn't get out. one night was enough! !

We stayed for two nights.It was $29.70 with Passport America and only partial hookups (water/electric). Bathrooms could use an update. Staff was very friendly. About 15-20 minutes to St. Augastine.

Other review is right on...nothing but a muddy field off I-95 next to a flea market.

The girls in the office were absolutely perfect. They were helpful, friendly and truly care about your happiness. The pull thru sites in the first section of the park were concrete , Fairly wide, plenty long enough for anything, and have concrete picnic tables. There's a tremendous dog park, probably 5 acres. Now... the rest of the park, for the most part is a slum. The storage area is full of campers, boats, and truck boxes that look for the most part, incapable of ever moving again, and filthy. The permanent residents have old dirty campers, with fences, barking dogs, decks ect. If you are offered a site number higher than 11, look elsewhere.

$35 for the night for a full hook up. They do have a separate dump station but that is in an overflow area during peak season. Easy registration. HOT SHOWERS. Great access off the highway. Good Wi-Fi.

| Nice park for the money

Courteous on phone, convenient to I95

We stayed here for a couple of weeks in spring of 2017. Very courteous staff, decent showers and facilities, close to I95 but far enough to not be too noisy. Dunkin donuts, Burger King, and Quickie Mart with food all within walking distance. We'll be back!

Very large park. Mixture of transient and what appeared to be permanent campers. Staff was friendly and helpful. They had a laundry room but 2 of the washers were broken. Right behind the campground thru a gate (walk or drive thru) is the St. Augustine Flea Market which was open on the weekends. The public drives thru a separate gate not thru the campground. We just walked over. Pretty cool stuff with a mix of good flea market stuff and yard sale stuff. Only downside is we were looking for a sign that actually said their name to make sure we were in the right place when turning off the highway. We just assumed we were going the right way. It would be nice if the sign that has the words “RV PARK” actually said St. John’s on it.

| Ok for overnight. A little pricey for what you get

Ok place to stay over night. Office person was friendly and informative. Lots are gravel and roads are broken concrete. It rained 2 of the 5 days we were there and there was lots of standing water and field was muddy across from where we parked. ( Don't get lot in the field) Positives: next to a flea market, just off I-95, close (4 miles) to St. Augustine attractions and there is a shuttle service . 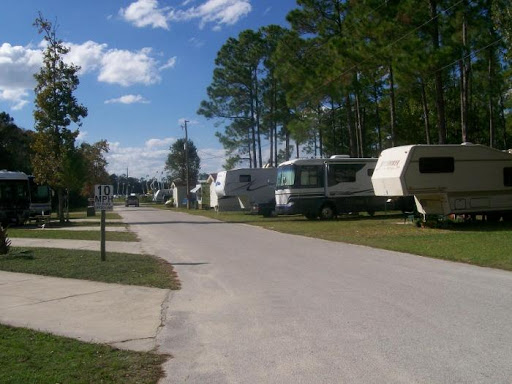