This is a gravel road and grass campground. Wifi does not work. Half of washers and dryers were broken. $2.50 to wash, $2 to dry is extremely expensive. Over $65 for fhu in what should be a $30-35 park. Tent campers cut through RV sites, kids run wild. Kids were in pool during rain storm. We will not return.

| Average and Overpriced but...

I generally agree with the comments regarding quality, cost and Internet. I will add, however, that people need to consider the impact of the short season on revenue. When a park is closed for 2/3's of the year but still has the same costs as parks that can have much longer seasons, they have to make up the difference by charging more. Location provides an ideal base for exploring the east side of Glacier NP including Many Glacier and Two Medicine. Park was quiet, clean and seemed to be well operated. Giant hot tub was nice. but should be limited to adults only after 8pm. Finally the operators should take to heart the comments regarding WiFi and bring someone in to properly configure a solution.

Best RV park in east glacier, but Johnson's is acceptable IF you can live with 30 amp. Rather basic tight sites. Most reasonably level. CG well run, but expensive (not a lot of alternatives). Ordered a pizza and it was fantastic so we ordered another one latter in the week and it was less than mediocre (not worth the calories imo)

Would never stay here again. Cabin was dirty and full of bugs. Large unit with one tiny AC which would not keep cabin cool and timed to shut off at night. We had no electricity in hallway and one lamp had broken light socket and wiring was exposed. We paid 50% down payment when reserving ( three parties) (large family reunion in different areas of campground). Second half was much more expensive than first half. They insisted that all three of us had to pay second half EXACTLY at the same time, even though they had no problem taking the first half at different times. I was paying in cash and when I insisted upon receiving a receipt the clerk told me I was "RUDE". Whatever happened to COURTEOUS CUSTOMER SERVICE!!! NOT AT THIS RESORT. WOULD NEVER STAY HERE AGAIN!!!

Get the best views of Glacier N.P. Awesome Service. The only Large pool & Large hot tub in 50 + miles. Fresh food served morning & evening. Park is located between upper & lower St Mary lake. Trail to lake from campground. Kayaking, boating. Awesome Family Park, plenty of room for the kids to roam. 1 mi. from east entrance to Glacier Park & 15 mi. from Many Glacier where the Grizzlies roam

A great view from most camp sites. Very close to glacier park entrance. Friendly staff. A reasonable space between sites. It is rather expensive but for the location and the short season that can be expected. The laundry is nice but rather expensive.

Not as nice as West Glacier, but definitely better than the other other parks around St Mary's. Didn't use the WiFi as our Verizon service was a blazing 52mb down/8mb up, so a setup a hotspot. Could use a little updating, super quiet, got the job done.

Nice campground that is extremely close to Glacier National Park. Small, but well kept with clean bathhouses and friendly staff. Even though we weren't there for the wif, it still would've been nice to have the ability to use it when needed. I think dial up (back in the day) was faster and more reliable than the wifi.

Glacier Park is spectacular. But this campground is very average to poor. It is very expensive for gravel unlevel spots many of which are just water and electric. Plus many of the sites have the utilities on the wrong side. For the money they are charging this is not a good park

| Average park in an awesome place

No question... Glacier National Park is a great place... but this is a review of the RV Park. It is a very average KOA. Average space size, semi-level spaces, horrible WiFi, good showers/laundry. However, not good enough for the $65 per night rate! I guess it's what you get near a National Park. FYI... we didn't see any other parks nearly as nice as this average park.

I think some of the critical reviews here are rather harsh. This really is a nice campground with many nice amenities. Yes, $65/night is a lot of $ for a FHU campsite; but there is no other campground nearby that is nearly as nice as this KOA or with the amenities. And, very importantly, this KOA is located just out side the park entrance, and the Red Jammer Buses even pick you up at the campground. We enjoyed our stay here and would definitely stay again.

| Weather put a damper on things

This place is a nice clean and convenient spot to stay while you explore Glacier Park. We stayed for five nights. The lots are typical KOA small and not a lot too them. Bring your leveling blocks. Spots are not level. Showers are hit and clean. Store is nice. Staff is great. Pool and hot tub are awesome. Small kids splash pad. One hole putting green. If we stayed here again we would spring for the delux patios site to get more room. 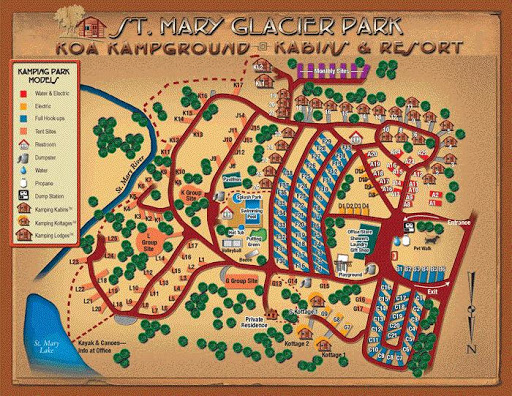