Price $35 per night for a full service small space. The location is great for going downtown. A lot of blowing trash in the area. We were there during the flea market & it was crazy!

The parking lot has electric and water. Thats it... No frills. BUT, only a two mile drive or bike to down town.

Well, I did say, I had not been able to talk to anyone, as no one was on site. Did come across a very apologetic maintenance guy who said the water leak had just happened a few days before, and would be fixed on Monday. He also acknowledged the electrical issues and apologized for that too. He said that he tries to keep people on the other end because of the electrical issues they are trying to fix. They also have a very large area that has about 200 sites that was not available because of the China lights display. I bumped to 3 * because if they get the repairs done as planned, it will be much better.

It's a quiet parking lot (if there's no major event going on). 30 amp service with water and sewer. Looks like it isn't really maintained well, but it worked. It's not much better than a wal-mart parking lot for me since I have a generator and can run it all night for less than $35. It was quiet, safe and convenient.

We stayed 2 nights in a Class A. This site offered a parking spot with 30 Amp, water and septic. Good value for $35. City Bus #52 is a 5-minute walk and takes you right downtown to all the attractions. Glad we found this spot.

Sewer too. Two RV parks. This one overlooks the china area park.

We arrived late, aware that no one would be on site. Specifically ask, will a 41' DP fit, was told yes, absolutely no problem. The 20' long site would hardly accommodate a 41' DP. Hooked up to water. None. It was shut off to 14 sites due to a leak. 30 amp service that wouldn't even run 1 roof AC. But in their defense, I've not been able to talk to anyone as they are not in on the weekends. They've not had a chance to fix. Paid 2 nights, only staying 1.

Check in at the flea market office which is a tan building with a blue awning to the right. There are two RV areas. A smaller gravel parking lot a and a larger area surrounded by grassy areas. I stayed at the larger area which had 50amp, 30 amp, water, and sewer, and a big grassy field for my dog (don't worry I picked up after her) I was able to catch the 52 bus to downtown ($1.70 one way, 6 stops to downtown) and sightsee the music hall of fame, the Capitol building, and the bicentennial park which also had a WWII memorial in it and a Nashville musicians walk of fame type of monument.

Sorry. We intended on staying but after 2 trips into the Flee Market area (where you register) and driving all around inside the grounds, we finally found where we could camp. Neither of us felt comfortable staying there at $35 per night. We elected to go to Walmart

No frills but got the job done.

Location location! While I agree with the other reviewers about it being a little of an odd layout, we found the rv parking area quickly and thankfully the folks in an rv parked beside us were so kind to help us figure out where to pay. Quiet spot and close to downtown. The folks in the office were very nice. The rv parking is not anything fancy but it is perfect for those looking to explore the downtown Nashville area.

If we were not desperate we probably wouldn't have stayed. Ended up being nice though. Nice neighbors. One gave us a ride to hockey game. Close to the city. Police sub station was there so we felt pretty safe. Met our needs. Only cost 9.00 for uber from downtown. Bus is cheaper.

This is not a campground with amenities. It is 3 parking lots beside the road. We stayed in our Class A 45 ft RV. We parked in the Bus Lot where the other Class A big RVs were parked. There was sewer, water and 50A. in the Bus Lot. We were in between events at the fairgrounds, that is probably why there were only a few RVs there. We felt safe there. It was an easy Uber to Nashville's Broadway street, which we enjoyed each evening.

The approximately 200 sites in the grassy area are closed for construction project. Only the 20 or so sites in the small gravel lot are open. The campground will be rebuilt after the other work. Per office this also makes the bus difficult to get to, he suggested Uber.

| Seriously Skip This One For The Next Year

So, for starters, yes, they are under construction and there are only 22 spaces available. Also, because they are under construction, the place is a total mess. Trash everywhere, parking lot is broken up and derelicts hanging around! The water worked part of the time, and the 30AMP worked at our spacebar the 50amp did not. They are building a new expo center, and then plan to tear down the 4 dilapidated buildings that are currently on site to put in a soccer field. Supposedly the new buildings are where the rest of the campground spaces used to be. Unless you just dont have a choice, avoid this one until MAYBE the contraction is complete.

Agree with other reviewers. We stayed here cause of proximity to down. Nothing special here. Just a parking lot. We were in a 30 ft pull behind. Full hook ups.

We chose this site because we were visiting friends and family. Access is steep and tilts. We managed with40 feet plus the road, but it was a little hairy. Sites are fairly level once you re up there. The entire site is paved with no shade and unfortunately we were there during the heat wave.full hookups and helpful staff. The fairgrounds are under construction so maybe we will try again in the hopes there are improvements to the campground as well as the grounds. Location was what drove our decision. 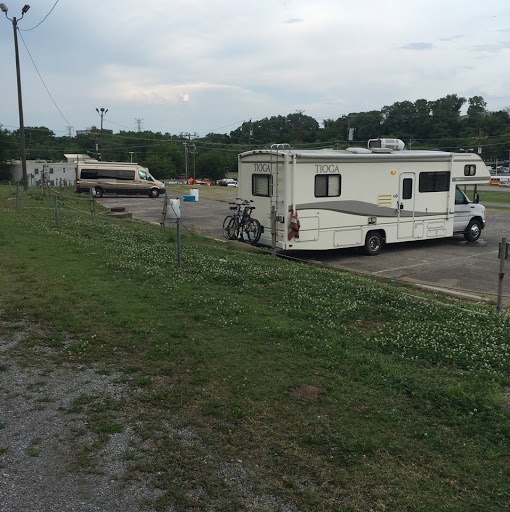